Promise, we won’t quote that Earth, Wind & Fire song…even though it’s awesome. But it’s September and we hope you remember there’s still a whole lot of year left to conquer as we move into the chillier months. Pull out your best sweaters and cozy up with some good news from Tidal!

WHAT’S NEW WITH US

We had another successful migration enablement workshop in September, graduating personnel from another 6 partners, more on them next month.

Also, we may have missed a proper welcome to Aliter, Lyceum and SyneCxity in the past, so a warm belated welcome to you! We look forward to helping you and your customers realize the benefits of a transformative cloud migration!

We’re keeping this virtual ball rolling with another All-Virtual Migration Enablement Workshop set for Tuesday, October 29, 2020. Register now and join us from home while our own David Colebatch walks you through the first 3 phases of the cloud migration process.

Can’t wait? You can sign up for a one-on-one if you like the sounds of a dedicated, private workshop, with our team.

We’ve released a ton of new improvements and capabilities recently, and we’re excited to be sharing this and others in the coming weeks:

With a large portfolio, it can be difficult to know where to start. You might ask questions like “Which of my apps are worth refactoring? Should I rehost or replatform?”

Tidal Migrations’ recommendation engine will point you in the right direction for each of your applications by measuring each app’s value and technical composition against your organization’s priorities. 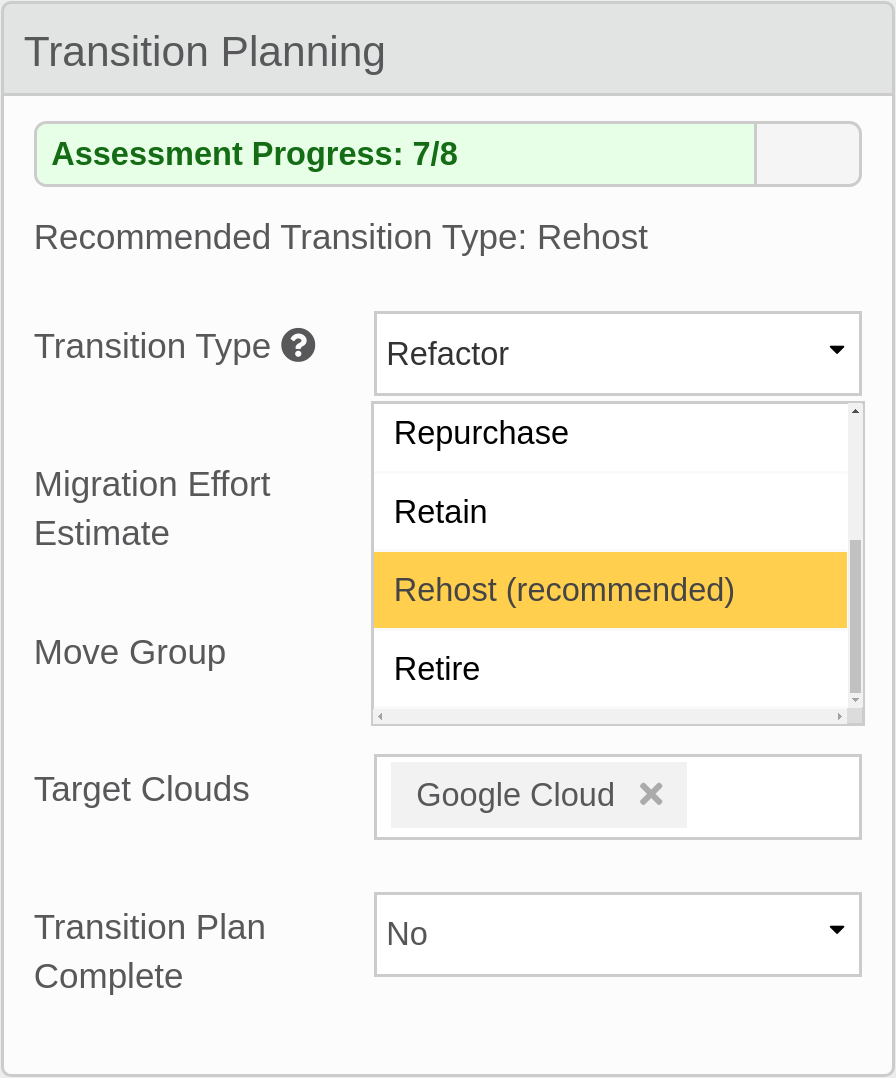 “Hey David, I was in your migration workshop and you talked about Scrumban…what is that exactly and why do you use it?” - Avash, Johannesburg

Scrumban is actually a hybrid of both Scrum and Kanban. Scrum is one of the tactics that helps you adhere to the values and principles outlined in the Agile Manifesto (popularized in 2001 by Jeff Sutherland and others), and Kanban is an older scheduling method developed by the Japanese for just-in-time or “lean” manufacturing, which was eventually ported to Software Development.

At Tidal, we’ve found that this approach, which includes a daily standup (the Scrum) with the visual scheduling of the Kanban board (we like Trello for this) can be applied directly to cloud migrations. We use this in the vast majority, if not all, of our projects and have found that the velocity, knowledge transfer, and the ability to get to migration completion on-time and on-budget, has been incredible.

For more information on some of these concepts, check out Sutherland’s TED Talk and a link to the Agile Manifesto with a terrific description of the 4 values and 12 principles from the CIO Wiki.

Also take a look at more of the Kanban method, or play around with Trello.

Since adopting this methodology… we’ve never looked back!

If you’re looking to access our past webinars, they’re available on demand after you register. Topics include: ingesting your application portfolio, source code analysis and more.

That’s all for September 2020. If you’ve had a good time with us this newsletter, let us know by sharing on social media (links below) and keep your friends up to date.

And in case you missed it, check out our August newsletter.

Stay united and see you in October!