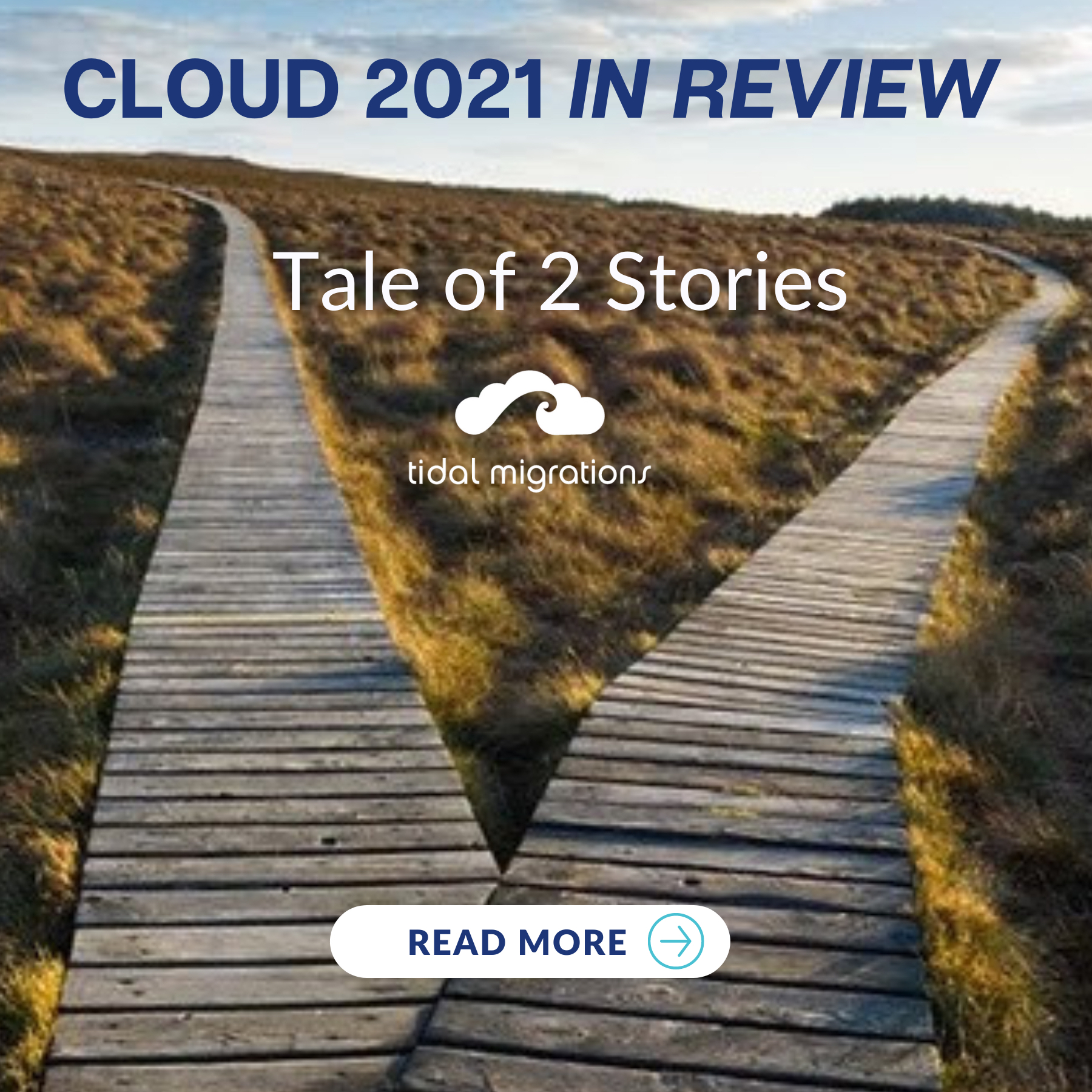 2021 turned out to be a tale of two stories – on the one hand we saw cloud investments and adoption on the rise, and on the other we observed uncertainties from leaders tasked with bringing about these transformations. Nonetheless, there is little doubt that 2021 was a hot year for the cloud.

As the COVID19 pandemic surges across the globe, organizations are forced to maintain remote working models while accelerating their digital transformation. Organizations have proven to be resilient in their perseverance to make lemonade out of lemons. Technology companies have answered the challenge in kind with a flurry of new, innovative cloud offerings, mergers, acquisitions, corporate spats and leadership changes. The three amigos AWS, Azure, and Google still dominate the cloud universe in North America and Europe, however providers such as Alibaba are catching up quickly with the Chinese cloud market growing by 66% in 2021 alone.

Cloud adoption continues to boom as the first quarter saw cloud spending increase to $41.8 billion globally, up 35% from last year. According to a Gartner research report, more than 70% of companies have now migrated at least some workloads into the public cloud, however, Andy Jassy at his last keynote (as head of AWS) in 2020 reported that only 6% of enterprise workloads were in the cloud at that time. This was up from 4% he reported the previous year. It’s unrealistic to think that this number changed significantly in 2021, so assuming it’s up to 10% migrated, this would mean that a whopping 90% of these workloads are still to be transformed. Therefore it’s not surprising that this momentum shows no signs of slowing as companies plan to increase their cloud adoption initiatives for the foreseeable  future.

With significant funding and a sense of urgency by companies, cloud migrations remain on a healthy upward trajectory. However, despite the industry optimism and increases in corporate investment, 70% of cloud migrations will still run over time or budget and there remains a shortage of cloud expertise to manage and optimize cloud deployments. Tidal Migrations performed research on LinkedIn in July 2021 to find that, globally, there were 393,079 open positions for cloud architects and cloud engineers. Given that you need years of experience to earn these titles, people will have to work much smarter, prioritizing application transformations that support business stakeholder needs. This scarcity of talented resources might explain business leader uncertainty with cloud migrations and why they often approach projects with hesitancy and trepidation.

Since moving applications to, and operating in, the cloud is new to most organizations, many still feel their way through the cloud, rather than relying on actionable data for guidance. We often see questions such as:

The term ‘modernization’ was a big buzz word this year which was echoed during top cloud provider conferences like AWS re:Invent, and Microsoft Ignite . It makes no sense to move apps into the cloud before understanding which ones should be moved at all and then prioritizing which ones to move first. Generally, organizations modernize their applications so that they can be more responsive to stakeholder’s needs, thus, modernizing while migrating to the cloud helps companies make the most out of the intrinsic value in their applications, data and infrastructure. Done correctly the results realized are a reduction in costs, better security, increased change velocity, faster deployment times, and greater business outcomes - all within one project budget.

As business leaders approach the cloud with caution, an interesting data point from Checkpoint technologies found that 75% of enterprises hold cloud security as a major organisational concern, 33% of respondents are extremely concerned, while only 25% were unconcerned or moderately concerned. When it comes to security, the path forward for many organizations is clear. According to DORA (DevOps Research and Assessment),

“teams who integrate security practices throughout their development process are 1.6 times more likely to meet or exceed their organizational goals. Development teams that embrace security see significant value driven to the business.”

Teams are able to accomplish this by ‘shifting left on security’, by integrating security into the entire cloud transformation process, leveraging automated tools in continuous integration pipelines, integrating InfoSec teams from migration through to operation and optimization.

Many organizations appear to favor a multi-cloud approach to storing their data and managing business processes as indicated in a Statistica poll which found that 90% of large enterprise respondents have already adopted multi-cloud. Whereas some organizations make their cloud provider decisions based upon relationships, it may be worth exploring a data-driven approach whereby the selection of cloud services is made based upon the technical needs of each application.

With data privacy regulations in full swing, California Consumer Privacy Act (CCPA), and European General Data Protection Regulation (GDPR), companies have been putting more attention towards compliance, and security mandates. These regulations now mandate where data can be stored, saved, obtained and transferred forcing companies to rethink where data is housed. What gets stored in the cloud and remains on prem will vary with each company, as considerations around performance, latency, cost, privacy and compliance must be taken into account.

The pandemic has certainly moved governments toward the cloud with spending far exceeding previous plans and budgets. Known to be a slow moving train, governments have transitioned into high-speed locomotives with mandates changing from a ‘cloud-first’ approach to ‘cloud-now’. This implies a shift in the way the public sector approaches the cloud, from adopting hybrid networks, security/data measures, choosing the right software and most importantly finding, training and retaining best in class IT talent. Governments however, are not only embracing the cloud, but serving as one of the primary cloud-adoption drivers.

Climate and social awareness has increased substantially since the pandemic, as we see companies responding to demands for more corporate social responsibility and proactive initiatives. In a 2021 Gartner CEO Survey, nearly half of the respondents believe a direct correlation exists between climate change mitigation, and how that will impact their company. As a result, there is a push to minimize carbon footprints across the board by cloud providers and affirming new carbon-neutral commitments. Enterprises in turn, realize they can achieve material change in their IT carbon footprint by leveraging both the efficiency of the cloud and also the cloud providers’ carbon-neutral energy sourcing. Companies have been unveiling their own tools to help curb pollution including Google and AWS.

The cloud universe has been a buzz this year as large companies see value in cloud adoption and capitalize on long term plays. There have been a few cloud business spin-offs, notably with Dell Technologies’ plans with VMware. Also IBM announced in October further details to grouping their global managed services practice under their new brand Kyndryl. We saw big news acquisitions in July with announcements from Hewlett Packard Enterprise (HPE) acquiring Zerto, who could have missed the $27.7B monster deal of Salesforce acquiring Slack and most recently Oracle acquisition of Cerner for $28.3B.

Changing of the Guard

Leader maneuverings have been in the works this year, signalling even more focus by companies on long term cloud strategies. Jim Whitehurst steps down as IBM President, and over at Microsoft, Rodney Clark took over from Gavriella Schuster as channel chief. Amazon had some big news with Andy Jassy succeeding Jeff Bezos as Amazon CEO, and AWS brought back Adam Selipsky as the new AWS CEO, formerly CEO of Tableau software.

Well… if 2021 was not exciting enough, don’t fret as 2022 will be sure to demonstrate fantastic advancements in cloud with no shortage of juicy stories. Cloud investments and migration projects will not surprisingly continue to grow, as Gartner estimates cloud spending will exceed $480 billion next year, up from $396B in 2021.

Many of the themes in 2021 will carry on into 2022. We will see advancements in AI cloud computing, increase in hybrid clouds, more awareness and adoption of serverless cloud platforms and ESG objectives further pushing sustainability initiatives as a major influence on cloud innovations.

“Each of the hyper scalar cloud providers have openly acknowledged this year that it is important to modernize while you migrate to cloud if you want to see successful business outcomes… I think we will see that transformative migrations will lead the way in 2022.”
Jason Hurlbut, Chief Value Officer, Tidal Migrations.

Happy Holidays everyone and see you all in 2022!