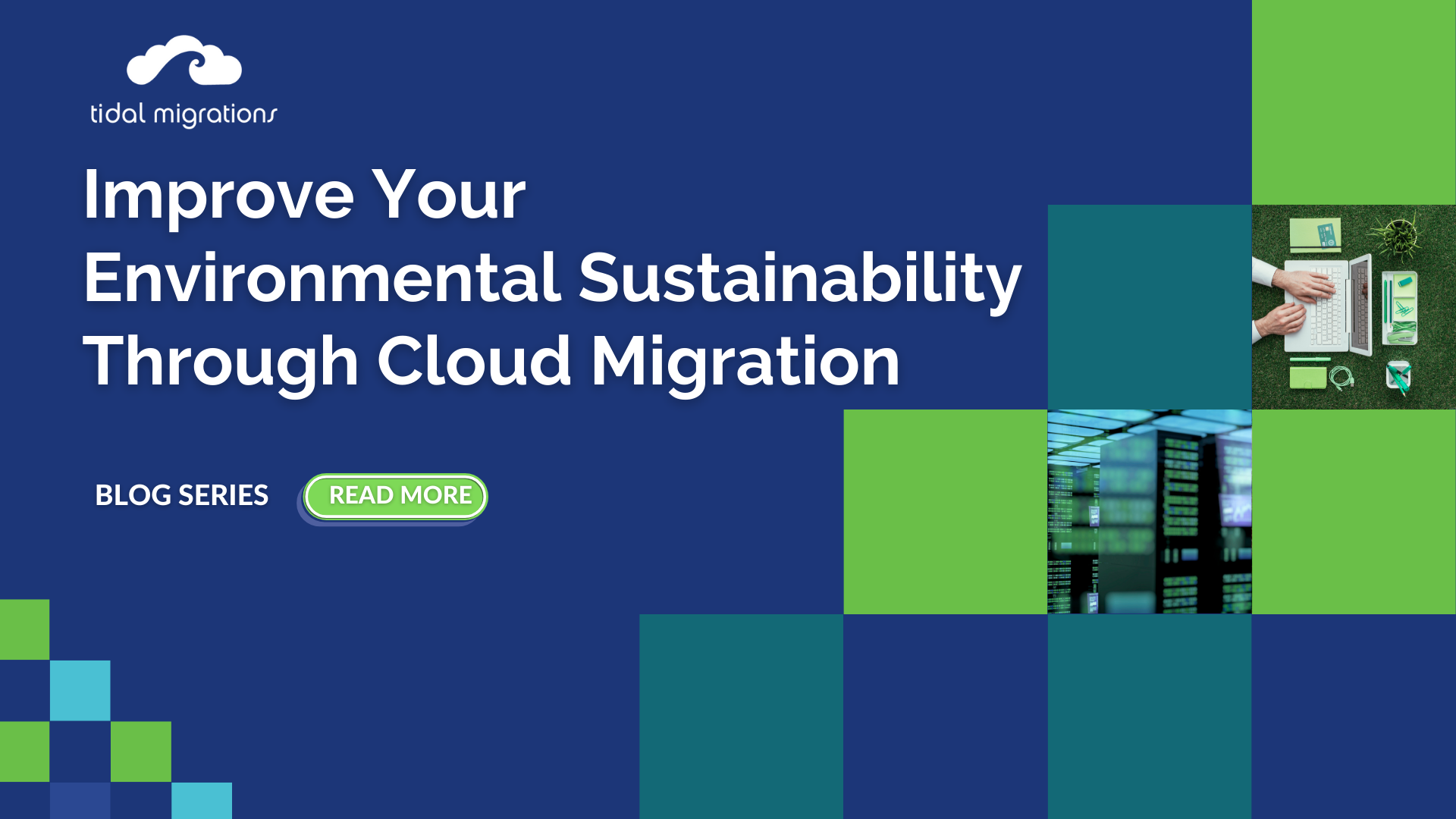 With rising awareness and increasing calls for action, the pressure is on to improve your organization’s energy sustainability. While frequently overlooked, moving your IT workloads to the cloud is one of the quickest ways to achieve a material reduction in your carbon footprint. Organizations typically look to the cloud to improve agility, scalability, and reduce costs.  The cloud’s outsized impact on sustainability and energy efficiency, however, adds yet another incentive to accelerate your application modernization and migration to the cloud.

The reasons for this are five-fold:

Data center efficiency is typically measured by its Power Usage Effectiveness (PUE). PUE measures the total data center power usage relative to the power usage of the IT equipment housed in the data center and is a proxy for the efficiency of the facility.

Enterprise data centers frequently have a PUE of 2.0 or higher. This means that as much power is being used to cool and illuminate the data center as is being used by the IT equipment itself. This high PUE ratio is due to older designs, sub-optimal layouts, electrical equipment power losses, low utilization and unstandardized IT equipment. Major cloud providers have the scale, IT uniformity, and modern designs that can achieve PUE factors of 1.10 and lower. This means that moving any server-equivalent from 2.0 PUE data center to a 1.10 cloud data center, you will save almost 50% in power usage for the associated computing workloads.

A far simpler way to participate in very efficient PUE numbers is to focus on your core business and let the cloud providers worry about data center efficiency.

PUE, while a valuable metric, only measures the efficiency of the data center and not the efficiency of the IT infrastructure housed within it. Enterprise servers are frequently run with very low utilization. Increases in both rates of virtualization and VMs per host have indeed helped increase on-prem CPU utilization in recent years. Most enterprises, however, lack robust orchestration systems and cannot achieve the same high CPU utilization rates enabled by the technical and economic resource allocation systems employed by the major cloud providers.

The major cloud providers have multiple systems in place that are designed to capture utility from every last resource located in their data centers. Burstable instances, spot instances, and shared tenancy in general, allow the cloud providers to share resources across customers while also economically incentivizing those same customers to release or sell back unused compute resources which can then be resold to other customers.

This orchestration and dynamic sharing of IT infrastructure resources leads to fewer wasted resources which further reduces power usage: i.e. you are using power only for the portion of the IT assets required at any given time rather than powering servers and storage that are underutilized.

Enterprise planners always need to plan their capacity based on their peak load point for any given period. Whenever total usage is not constant and predictable, this leads to underutilized IT resources and their related power usage. For applications running in the cloud however, this need to over provision resources at non-peak times goes away. In the cloud, you should provision to your current usage level and employ auto scaling tools such as AWS’s Elastic Beanstalk to scale up your IT resources as required rather than in anticipation of such demand in the future.

Calibrating your resources in the cloud to your current requirements will save both the IT capital and power usage associated with the underutilized IT capacity in your data center.

The concept of efficient asset sizing of the previous section is extended via cloud native architectures such as serverless applications. Rather than merely sharing physical servers among many tenants running their own VMs, serverless architecture breaks down the compute resources into even smaller pieces, i.e. units of time on a CPU. With serverless applications, cloud customers are allocated and charged for units of time for which the code is running on a CPU. This level of granularity allows your applications to use very small increments of compute power for only the seconds that you may need it. Converting applications to serverless architectures can frequently save up to 90% in application hosting costs. These savings reflect usage of compute resources and the associated electricity for a small fraction of time compared to if such IT and power resources were consumed with a conventionally hosted application.

As mentioned earlier, it can be difficult to achieve carbon neutrality or net zero emissions by going it alone in your enterprise data center. From a sustainability standpoint, it makes much more sense to move your workloads to the cloud and catch a ride on the major providers’ sustainability initiatives.

Microsoft, Amazon, and Google all have similarly aggressive sustainability commitments. Amazon and Microsoft have committed to sourcing 100% of their power from renewable energy sources by 2025. Google is already carbon neutral and will operate solely on carbon-free energy by 2030.

Such sustainability initiatives are complex, require scale, and access to energy information that is not easily accessible. Companies such as Ledger8760 are working to make it easier to understand, measure and report your carbon footprint, but it remains a formidable task for most entities without the scale and resources dedicated to such initiatives.

Cloud migration done correctly is easily justified by cost savings and improvements in agility and flexibility. Off-loading your IT and data center power consumption to clean-sourced power used by the cloud providers is an added benefit that can also help your company achieve its sustainability objectives.

A well planned and executed migration has many benefits that extend to costs, agility, and sustainability:

Tidal Migrations has been helping companies move their workloads to the cloud since 2017 in the name of increased agility, scalability, and cost effectiveness.  If you are seeking these same benefits, or are looking to improve your sustainability metrics, Tidal Migrations’ software, methodology, and professional support can help you achieve them rapidly and efficiently.